The Mayor and TfL are committed to making London’s roads safer for all. In a further step towards our ambition to see the Capital’s roads free from death and serious injury, the Safer Lorry Scheme has been launched in collaboration with London Councils and Heathrow Airport. 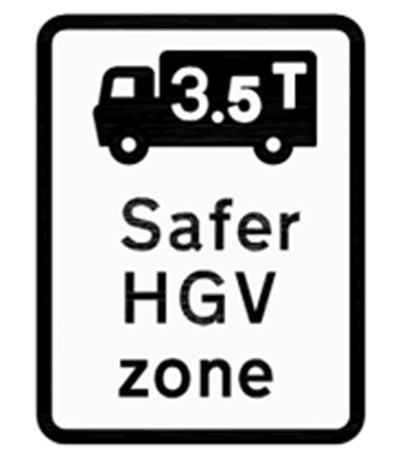 This signage will be installed at the boundaries of the scheme

This new scheme uses a combination of powers held by these bodies to deliver a simple, quick and complete solution across all roads in London.

The scheme ensures that only lorries with basic safety equipment fitted will be allowed on London’s roads. Under London’s scheme, most vehicles that are currently exempt from national legislation for basic safety equipment will have to be retrofitted. This includes construction vehicles, which are involved in a disproportionate number of fatal collisions involving cyclists and pedestrians.

Under the scheme, vehicles over 3.5 tonnes that are currently exempt will be required to:

The scheme will operate across London, 24 hours a day, seven days a week, covering the same area as the Low Emission Zone (see a map of this area). It will come into force on 1 September 2015.

The scheme will be enforced by the Metropolitan Police Service, City of London Police and the Driver and Vehicle Standards Agency.